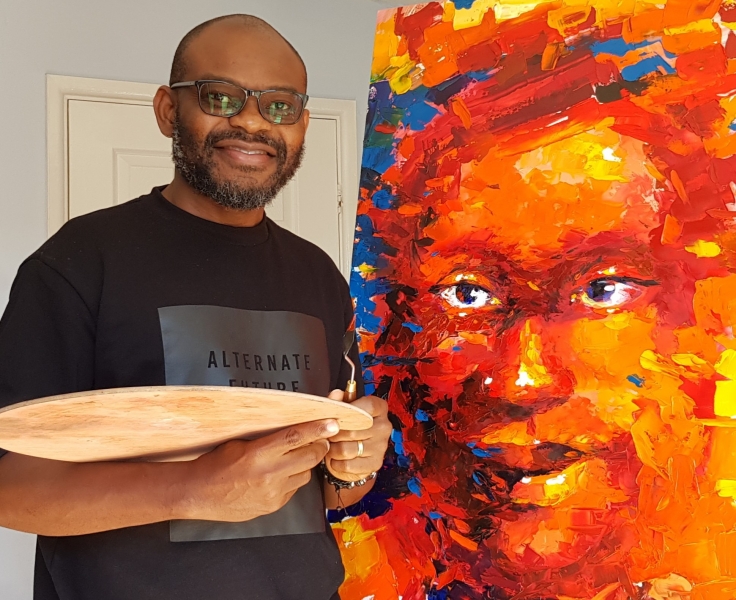 The landlord of a rented Manchester apartment, which he was moving into, was facing a repossession order – leaving Ayoola, his wife and two young sons stuck between properties with nowhere to live.

Months of bouncing between the local authority, Shelter and rodent-infected temporary accommodation left its mark on the family.

Which is why Ayoola – now a Manchester Rotarian and professional multi-media artist who lives in Beswick - has pledged a percentage of profits, from his first solo exhibition of work, to Manchester’s Booth Centre.

Thirty original works go on three-day display in the Ulster Gallery at the Irish World Heritage Centre in Cheetham Hill. ‘The Mancunian State’ opens with a private viewing on 19 July followed by two public days on 20 and 21 July.

Ayoola’s art college degree in Lagos, Nigeria, earned him a directorship with an advertising company before he moved to Manchester in 2007 to continue his studies

That was when his own close shave with homelessness left a scar. “The trauma of my family's potential fate would not go away for a long time,” he says. “Thinking about it right now still makes me shiver because I can imagine the despondency, depression and suffering among folks who have to sleep rough on the streets.

“At least we had a mould-covered place to live that was unbelievably infested with creatures that would drag large food items from the kitchen into the living room, bite large chunks out and then disappear. Those experiences alone shaped my decision to support the homeless.”

That has included joining Manchester Trailblazers Rotary Club which is a long-time supporter of the Booth Centre - a Manchester based local charity that looks after the interests of homeless people.

Ayoola’s works in ‘The Mancunian State’ - from oil paintings to charcoal sketches selling for between £50 and £5,000 - will feature images of homelessness and poverty alongside urban landscapes in a place where hungry people can be seen begging for money in front of wealthy business corporations in a successful and commercially thriving city.

“The exhibition will celebrate the beauty and diversity in the spirit of this great city,” says Ayoola. “It’s a place where communities exist regardless of religious, racial or economic differences … but where difficult social issues are still begging for solutions.”

To register for the private viewing of The Mancunian State on 19 July from 6pm to 9pm at the Irish World Heritage Centre, Manchester visit: www.eventbrite.com/e/the-mancunian-state-art-exhibition-private-view-tickets-46713278674