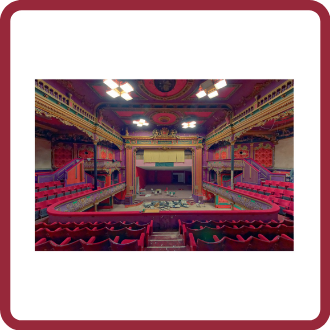 Grade II listed music hall Hulme Hippodrome’s future is under threat as the building goes up for sale by auction on 10 February.

An iconic building of social, historical and architectural significance, it has been neglected into a very poor state of repair by its previous owners Gilbert Deya Ministries.

It has been on the Theatres Trust’s Theatres at Risk list since the list began in 2006.
A campaign group Save The Hulme Hippodrome has plans to stop potential residential redevelopment of the site and return the building to use by the people of
Hulme.

The group has a long-term vision for Hulme Hippodrome using the building for a Museum of Manchester Musical Art, a theatre production school, bike hub, library and bakery. This could provide opportunities for the people of Hulme to play a part in the next stage of the theatre’s story.

Made up of local residents and supporters, the campaign group includes Oli Wilson, son of Factory Records founder Tony Wilson. Oli runs PeaceMeal, a social enterprise bakery and employment academy in the NIAMOS Centre in the co-joined Hulme Playhouse. While stable for now, the Playhouse will be put at risk if the Hippodrome continues to deteriorate. The long-term plan would see the two theatres run as complementary community hubs.

Oli says, ‘The Hippodrome has played an important role in Manchester’s arts and communities for over 100 years. It could, and should, go on for another 100 years.
To have this legacy and future potential destroyed, so that a few may turn a profit, would be a gargantuan hit for both people and the arts in Manchester.’

Paul Baker from Save The Hulme Hippodrome Campaign says “Without urgent action we are in serious danger of losing the building along with the cultural memories it holds. We would urge the people of Hulme and the wider Manchester area to come together and help save this wonderful building.”

Claire Appleby, Architecture Adviser from Theatres Trust, the national charity that campaigns to protect theatres says “Hulme Hippodrome, which is on our Theatres at Risk list, is in grave danger of being damaged beyond repair and it could be bought by speculative developer, who does not appreciate what a gem this building is.”

The group has just launched a crowdfunding campaign, aiming to raise £10,000 to pay for initial legal and survey costs, which would be vital first steps in acquiring the building and starting planning for its future as a venue for the community.

Save The Hulme Hippodrome is also calling for social media managers, fundraisers, architects, surveyors and community activists who want to get involved. Contact them at savethehulmehippodrome@gmail.com to find out how you can help.

The Crowdfunder for Save Hulme Hip is now live