Home » Manchester Culture Awards are back for 2021

Manchester Culture Awards are back for 2021 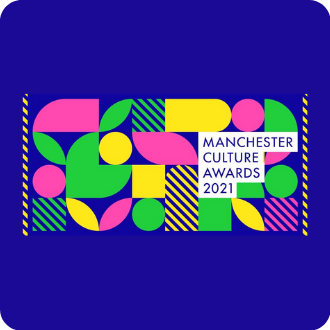 After a forced break last year due to the pandemic, the Manchester Culture Awards – recognising the very best of culture, arts, and creativity in the city – are back for 2021.

Nominations for the hugely popular awards have opened, with awards across twelve different categories, including Best Performance, Best Event, and Young Creative of the Year, as well as a number of awards that shine a spotlight on the creatives behind events, shows, and projects.

In recognition of the fact that many theatres, galleries, and other venues were forced to close their doors for most of this last year – with some still to reopen – the awards this year will recognise two years' worth of cultural activity from April 2019 to the end of March 2021.

The awards will also pay homage to the many cultural organisations and individuals in Manchester that stepped up during the last year and, by doing things differently in a very Manchester way, helped keep us all connected and entertained at a time when many of us were alone and not feeling great.

As in previous years there will also once again be a special additional award made in partnership with the Manchester Evening News. The Manchester People’s Cultural Award will be presented to someone whose dedication and contribution to culture in Manchester deserves be recognised, with the final winner chosen by a public vote.

Nominees for each of the awards must be based in the city of Manchester or have a track record of delivering activity for those who live in or visit the city, or that benefits the local economy.

Judging will take place over the summer by a panel of expert judges. All nominations will be looked at and carefully assessed before a full list of finalists is published in October.

Winners will be announced in November at a special awards ceremony which it is hoped, subject to any Covid restrictions in place at the time, will be a live event with an invited audience.