The Best Part is the End!
Community Explorers Story

‘You can tell it is a Community Explorers meeting by the noise’. Lots of conversations and networking is the one of the main reasons people attend these community health and care meetings. On Tuesday 19 September, there were 18 participants including Jobcentre Plus, Manchester Carers Forum and the North Manchester Black Health Forum.

Community Explorers meetings are an important way of linking up with others and discussing any local health issues and their impact on people’s lives. There were talks by the Parkinson’s UK nurse in North Manchester about their specialist advice and how they could work with other organisations such as Citizens Advice Bureau.

Tara, an expert patient, talked about how her experience of a long term condition led to her volunteering and now a paid position delivering training. She spoke about how managing after her head injury gave her a new perspective on life and an ability to relate to others trying to look after their health.

Macmillan also gave information about how they support people living with cancer. They work in a non-clinical setting with anyone in Manchester going through cancer or their families to discuss any work issues, access to benefits or just to have an honest talk.

The chatting, networking, and the sharing of leaflets and material leads people to say that one of the best things about Community Explorers is the end of the meeting! 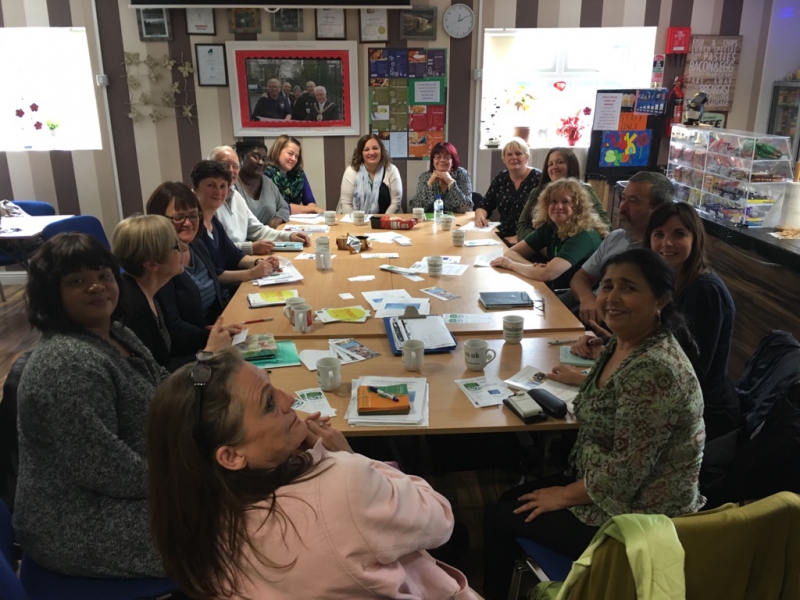 Joanne has been with the Gaddum Centre four to five months and is the Team Leader for IAPT counselling. The talking therapy services are based in GP surgeries across Manchester providing 12 weekly 1:1 sessions with clients referred by their GP.

Also, a specialist service for BAME clients is offered from the Roby in Hulme, with counsellors who speak various languages. Many of the asylum seekers and refugees accessing this service have been through very traumatic events and often have post-traumatic stress disorder. The IAPT service offers Cognitive Behavioural Therapy / Person centred and Integrative models of counselling and also hosts student placements from Manchester and Salford.

Talking therapies are really effective for mild to moderate psychological difficulties. A recent report showed that 60% of Gaddums’ clients have seen a reliable improvement in their mental health after accessing IAPT at Gaddum. This has a massive impact because mental health affects the whole person.

Joanne said, “The feedback we get is that it makes a massive difference to people’s lives. There’s just 12 weeks of therapy but a big impact because of the 1:1 relationship that’s built up. The first response used to be medication but now it’s recognised that talking therapies are highly effective.

I talked to an older lady from Gorton who said that counselling wasn’t something that her generation would have considered, but she was so glad she took up the offer following the bereavement of her partner. She said after the intervention she was ready to move forward and counselling had helped her to get to a stage where she didn’t feel ‘stuck’ in grieving.”

The Gaddum Centre is an independent local charity established in 1833 with a long history of providing quality services in the field of health and social care.

“I know it’s Tuesday because I am going out to lunch and I don’t normally go out”. Every week for the past year, older people in Wythenshawe have had the opportunity to meet up for lunch at the Northenden Social Club. Apart from sharing a meal together, the lunch helps everyone to socialise and meet others in a community space.

On Tuesday 19th September, there was a buffet with cake and soft drinks provided to the 33 people attending who ranged in age between 57 and 97. However, there is no age barrier to who can attend and the food is served by younger volunteers. There is no commitment needed to go every week and there are other activities held on other days.

One lady has brought acrylic paintings to show and tell. Everyone was really impressed and she has now donated images so the group can make postcards to sell.

There have been guest speakers such as Northenden History and the group has been involved in research for Manchester Metropolitan University and the British Heart Foundation. Sharing their life experiences helps to make life better for others. 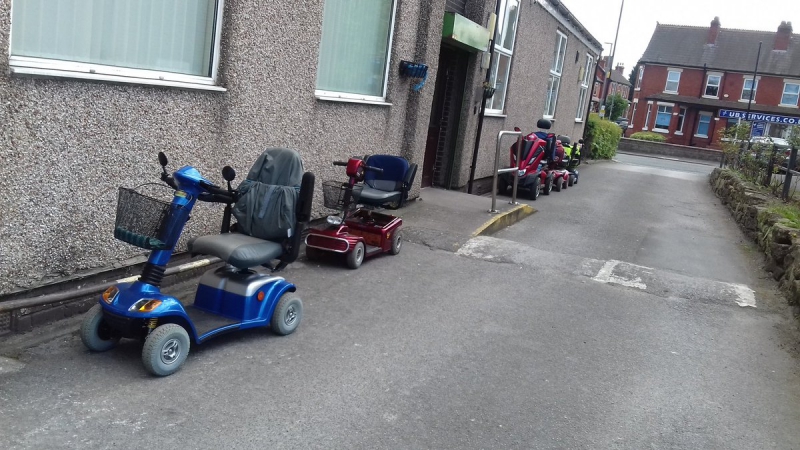 A Storify version of their story, including videos, is available here - Wythenshawe Good Neighbours Storify