Spirit of Manchester Story - "He's improved so much since he started, and he'll improve more"

Since May this year, Refugees & Mentors and Rainbow Haven have worked in partnership to expand the Rainbow Haven Work Club in Gorton. The Work Club is part of Rainbow Haven's community drop-in, offering support and activities for refugees, asylum seekers and vulnerable migrants.

People using the work club have a wide range of overseas skills and experience, from lorry drivers to pharmacists, joiners to teachers. They face many hurdles rebuilding their lives in the UK, including learning English and digital skills. We've recruited volunteers who share the language of people using the centre and who have great digital skills, to provide flexible and individual digital skills support for clients.

On Thursday 27th September, volunteer Hassan had a one -to-one digital skills session with service user 'W', mostly in Arabic. At the time of the interview, these sessions had been going on for six weeks, with just two weeks to go.  Some of the topics covered include how to use the internet, how to email, and how to use software such as Microsoft Word. At the end of the checklist they are working through, Hassan will go over everything they have covered, to ensure that 'W' feels confident in his digital skills, so he can manage day to day, or get a job.

If Hassan’s comments are anything to go by, this shouldn’t be a problem. When asked about ' W'’s progress, Hassan said “He has improved so much since he started, and he’ll improve more”.
'W' commented on how much his own confidence and skills has improved, saying “Before (I) couldn’t use a computer, now I can use email, use Microsoft Word”. 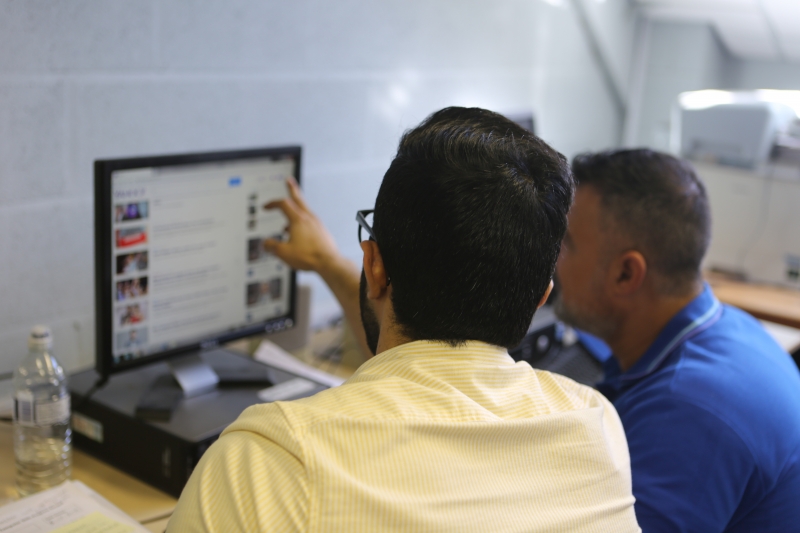 The Widows Empowerment Trust, which was founded in January 2017, supports widows and widowers including those with dementia, with the goal of empowering widows and promoting social inclusion.

Today was their weekly arts and crafts and karaoke session. Oyovwe, founder and CEO of the Widows Empowerment Trust explained, “Our service users always look forward to these sessions, which help them with their self-esteem and to integrate with other people in the community.”

Oyovwe also explained how much joy the sessions bring to the beneficiaries, who often are not able to access any other services. These two hour sessions provide the perfect opportunity for many widows and widowers to build their confidence and to make friends, with whom they can dance and sing.

A testament to how much the Trust helps to empower widows, several past service users now volunteer with the Widows Empowerment Trust, helping to support the various sessions and to provide encouragement. Oyovwe joyfully explained “I’ve seen such a great improvement in the people we help”, demonstrating just how amazing these sessions are.
Oyovwe also added that “often the beneficiaries know all the words to the songs and the music helps to bring back many memories for them”.

The Widows Empowerment trust also runs pamper sessions, where the service users have the opportunity to visit a spa, swim and spend time together relaxing.
All these sessions ensure that widows and widowers have the support that they need whilst also creating a stronger, more unified society. As Oyovwe says, “the more people we are able to reach, the better the community will be.” 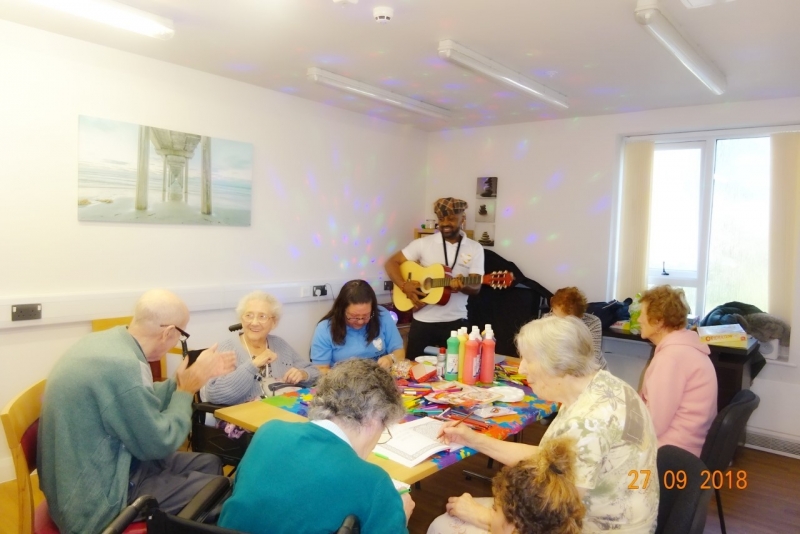 Spirit of Manchester Story - Fresh and tasty food, from community garden to table in less than five minutes

Sow the City, first established in 2009, is an award winning social enterprise based in Manchester. Now the leading specialist food-growing company in the city, Sow the City believes in encouraging people in urban areas to grow and eat nutritious food, whilst also strengthening local communities, reducing food transportation and creating jobs.

Today (28th of September), Sow the City has been working on building a 3 bay compost system at the Well, Ardwick. Louella, a volunteer who came up with the designs for the permaculture garden at the Well, the first one of its kind in Manchester, says that “the project really helps the guys who live here at the Well.” Louella explained that the 3 bay compost system helps to get rid of waste without sending anything to the landfill, whilst also saving money by avoiding the need to buy expensive compost.

Not only is the garden highly eco-friendly, it also provides the residents and the wider community of Ardwick with a readily-available and free food source. The food that is grown in the gardens is used to cook fresh meals for the residents. Jon, founder of Sow the City, says that the food grown is much fresher and even tastier than what can be found in local supermarkets, and can go from garden to table in less than 5 minutes! Members of the wider community are also welcome to visit the gardens and take the fresh produce to enjoy at home.

Paul, a resident at the Well who was involved in today’s session, says that the project has been beneficial to everyone involved. He explained that it “motivated him to garden more and to develop new skills”. He also added that it was highly resourceful and that it felt brilliant to know he was eating food that he had had the opportunity to grow.

Andy, another resident at the Well, explained that the gardening was “therapeutic for him” and provided him with an opportunity “to give something back to the community.” He explained that everyone involved is really friendly and the project feels like “having a little family”.

Whitemoss Youth Club and Community Centre is celebrating it’s 62nd Anniversary this year. Run by young and older volunteers the centre caters for children aged 6 to 19 or 25 with disabilities and senior citizens through a regular luncheon club.

The luncheon club is our feature for todays Spirit story - connected with Age Friendly Manchester and North City Nomads it is safe to say that the luncheon club is a roaring success. Today (28.09.18) has seen around 20 local residents attend the centre for the latest luncheon (Biggsy’s Stew with Bumplings) supported by young and adult volunteers and Pure Innovation attending to offer their assistance in preparing, dishing up and cleaning away afterwards – it certainly has been a packed out club. One volunteer from Pure Innovation absolutely loves making custard and was adamant that today custard making was going to be their role for the day. As for Danny – everyone was calling out to Danny for their cup of tea throughout the whole session – plenty of shouts for Danny were made today! While John (Centre Manager) was calling Bingo numbers out.

The luncheon club offers a perfect opportunity for local senior citizens to come together reducing their social isolation, connecting together and generally catching up with one another. Todays session has seen two local residents come back to the club after a period of absence after recently suffering bereavements proving that the club offers a safe, friendly and welcoming environment.

John Biggs B.E.M. who manages the centre mentioned that senior citizens in the local area of Charlestown do suffer from social isolation and so in partnership with North City Nomads a number of initiatives are offered throughout the year to help tackle this issue. This Tuesday saw 230 people visit Liverpool on an excursion which as you can imagine takes a lot of planning. Today John announced information regarding the next trip which will be for the groups Christmas meal which he knows will fill up quick.

Another outcome of hosting the luncheon club is the intergenerational work that naturally occurs with the use of young volunteers who love to listen and support the older generation. One volunteer is looking to embark in a career caring for older people and so is gaining invaluable experience to assist them in their journey to gaining employment.

Later tonight the club will open its doors to 7-11 year olds approx. 50 children will attend to offer a variety of youth initiatives using the facilities that Whitemoss Youth and Community Centre has available. 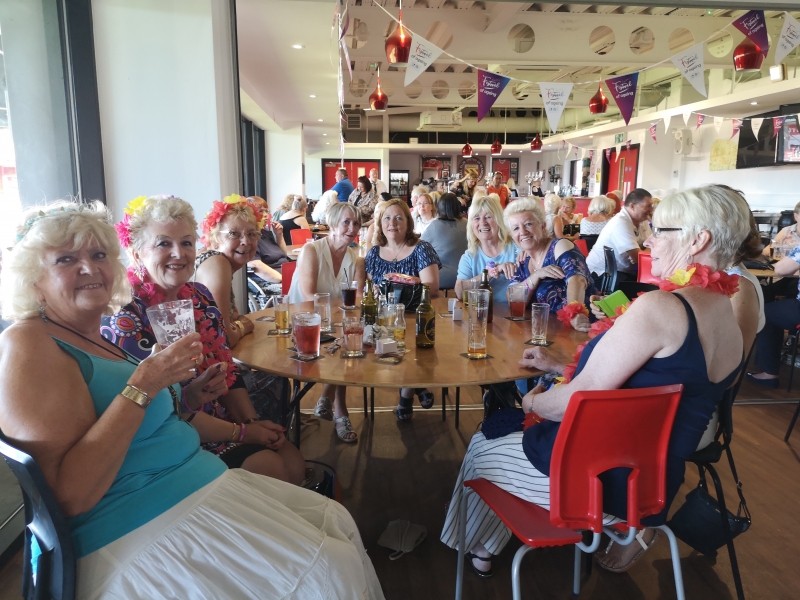 Spirit of Manchester Story - A family who laughs, cries and works together for change

Women Asylum Seekers Together (WAST) is a diverse organisation that supports and empowers women seeking asylum, although it goes far beyond that. In addition to campaigning and advocating rights for everyone going through the asylum system, they provide a weekly drop in session every Friday from 10am – 3pm.

On 28th September, following one of these sessions, Eunice, a coordinator for WAST, described the goings on of a typical drop in session. On this occasion, around 80 women and 5 children attended the group. Members are greeted by the management group on arrival, and hot meals and food parcel are distributed. Eunice stressed the importance of this aspect, as it is common for the people who attend to be destitute, with no money and sometimes no place to live. In addition, there are a number of other helpful services available, such as volunteers who offer advice sessions on a wide variety of topics, and every month a lawyer volunteers to provide free legal advice to anyone who needs it.

WAST also runs a choir and a drama group in these sessions, which they use to express and communicate the issues people seeking asylum face on a day to day basis. Eunice said that the WAST Choir had been invited to sing at the University of Manchester’s School of Arts, Language and Cultures, and in the past have went into the community to reach out and educate people who are unaware of problems people in the asylum system face.

The fascinating thing about WAST as an organisation is that they are also managed entirely by either people who are currently seeking asylum, or have sought asylum in the past. This could be the reason Eunice was so passionate when discussing the impact the drop in sessions have on the participants, having experienced many of the same barriers as them. She understands how hard it can be for women seeking asylum, and said ‘I often use myself as an example’. This understanding is crucial in connecting the organisation, and allows for a deeper level of support. By working together and sharing each experiences, everyone is able to learn and become empowered.

Over the course of the discussion, Eunice described WAST as a family more than once, and it’s not hard to see why. When women seeking asylum don’t have anybody else to rely on, she said that they “cry together, work together and enjoy together”.

Eunice used an example of one woman in particular to exemplify the work of WAST. This woman came to the UK knowing very limited English, which hindered her in every-day life, as it does with so many others in the same situation. A volunteer led some English classes, and over time she also became involved in the choir and drama groups. Learning these skills, combined with the supportive setting, allowed this woman to build her confidence and reduce the stresses she previously suffered from, and become another member of the Women Asylum Seekers Together family.