Greater Manchester Immigration Aid Unit - "Thanks for bringing our Dad here. Now we are happy"

Greater Manchester Immigration Aid Unit (GMIAU) runs a drop-in advice clinic every Tuesday morning. This starts at 8am but there is often a queue of people waiting for them to open. On Tuesday 20th September, there were 3 caseworkers and between them, they held 15 consultation sessions plus one emergency. They were assisted by a volunteer who is training to become a paid caseworker. There is always at least one emergency case, sometimes more. 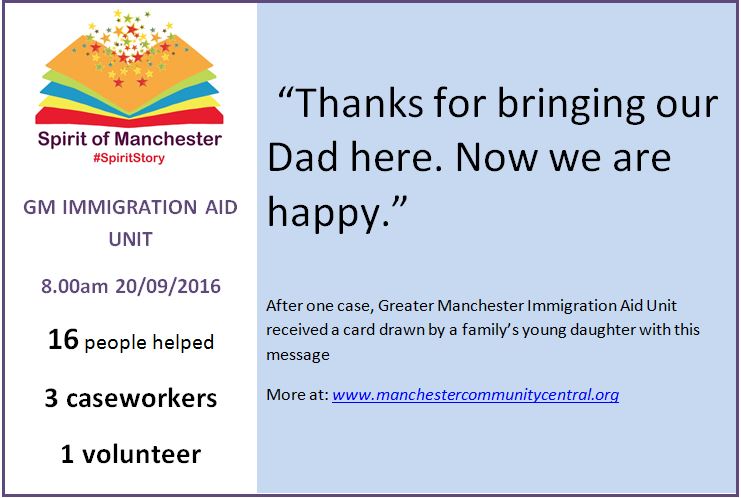 GMIAU knows that just 20 minutes of good advice about the immigration system and processes provided early can make a huge difference to the outcome. Some people may have education or language barriers but even good English means nothing if you can’t understand the system you have to work through. Smaller firms of solicitors and law centres used to be able to help with this sort of thing but since Legal Aid was reduced, they have largely stopped being able to provide this. GMIAU have seen the demand for advice increase and have managed to gain funding for caseworkers but can only offer the drop-in every Tuesday morning. There’s demand for much more.
It’s not just the impact on individuals, it’s the families and the wider community. People who come here want to be with their families and this support often helps reunite them, giving people a new life in a safer place. After one case in which they helped, GMIAU received a card drawn by a family’s young daughter which said “Thanks for bringing our Dad here. Now we are happy.”


The Men's Room - a journey of discovery of Manchester life

'I found the tour a real eye opener and enjoyable. There is a voice out there and the Men's Room have helped me find it'
Sweeney

Lost and Found is a four month piece of work by The Men’s Room . On Tuesday 20th September, 23 people were led by a service user guide on a walking tour of the Northern Quarter in Manchester. The aim is to have opportunity to see Manchester through someone else's eyes, walk alongside lived experience and be exposed to The Men's Room creative approach to life.

As part of the project, garden planters were made at Hulme Community Garden Centre by people who wouldn’t normally be involved in gardening. These 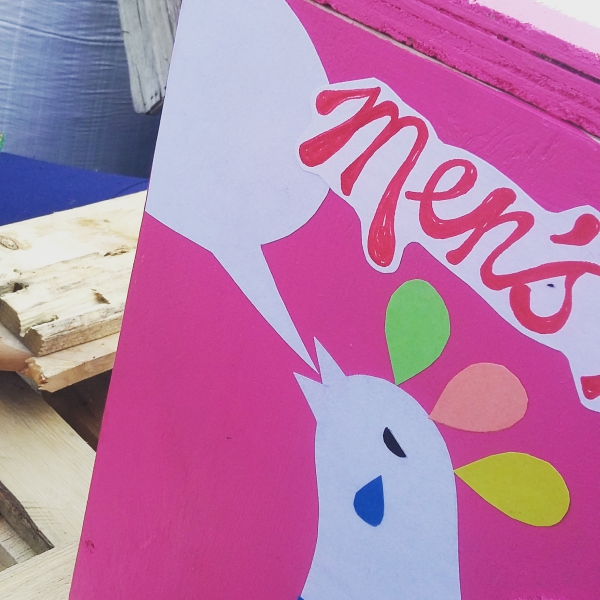 would be included in five gardens that are based at city centre locations. They also made viewing boxes to enable people to ‘look at Manchester in a different way’ during the walking tours.

The Lost and Found walking tour starts from the Men’s Room Swan Street Office. The audience are those who have experienced homelessness, drug use and mental health issues, and it will enable people to have an engagement with the city and challenge media messages around homelessness. It also enables a dialogue with a wider audience as the boxes have QR codes where people can find out more.

'Homelessness what is it?
Is it a disease or a way of life?
Is it the norm or just the way things are now?
Is it forever and not to be thought about again?
The answers are simple
NO NO NO'


The Pankhurst Centre - giving choice that had been taken away

When Irene was told by her consultant that she’d have to take things easy after an operation, the first thing she told him was there was no way she was giving up her role as a volunteer at the Food Bank at the Pankhurst Centre. “The volunteers have become my family, the Food Bank is more than making sure people have food to put into their mouths, it’s about putting a smile on their faces”, said Irene.

Today Irene and a dedicated and enthusiastic group of volunteers are preparing for tomorrow’s weekly Food Bank Day which is a lifeline for women and children who are referred to the service by organisations including Women’s Aid, Rape Crisis and others. Its tough work and long hours with donations of fresh food, non-perishable items and clothes having to be collected, unpacked and arranged ready for the arrival of around 22 families. Many of these women have had choice  taken away from them because of their experiences of abuse. "Instead of giving women a bag of stuff, our service is about giving women choices to pick the  things they need and will use", said Karen a worker at the Food Bank.


Safety4Sisters North West - somewhere where voices can be heard

“Many of us have been told that we have no rights, either to be heard or to be supported. Here we feel safe, here we feel at home.”

A migrant woman attending today’s group meeting along with her 1½ year-old child had been referred to the project previously by a domestic violence support group. She was living in a B&B, alone and isolated after leaving an extremely violent husband. Unaware of her rights or what to do, Safety 4 Sisters NW helped her to access support from an immigration adviser that enabled her to apply to the immigration authorities. After three months and as a result of the support she had received, this woman was given indefinite leave to remain in the UK.

Safety 4 Sisters Northwest is a migrant women’s rights organisation based in Manchester. They are at the forefront of activism to support women subject to immigration control that have no recourse to public funds and are experiencing gender-based abuse. Late last year, to meet the growing need that was very much in evidence to the organisation’s activists, the Migrant Women’s Rights to Safety project was set up. This takes the form of a weekly meeting attended by service users who are experiencing immigration control issues and often horrific gender-based abuse. The project gives women at the margins of society a safe space to meet and somewhere where their voices can be heard. 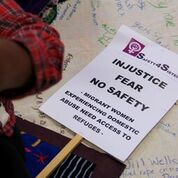 Around 60 women and their children use the service at present and at the weekly meeting that took place today, 15 women and 16 children attended. At the weekly meetings, they can access information, advice, advocacy and practical support in a safe, confidential and supportive environment where they are provided with lunch and opportunities to socialise with others. These women are empowered to help themselves overcome incredibly complex problems in their lives.


The Day Two Storify can be found at https://storify.com/PolicyVoiceMacc/spirit-story-day-two