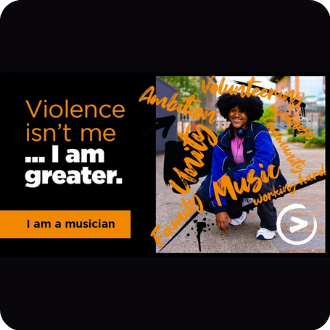 Young people have shared their stories of hope and aspiration as part of a new campaign to help others steer clear of violence and achieve their future.

The latest phase of ‘I am greater’ was launched on 10 June by Greater Manchester’s Violence Reduction Unit (VRU). It features young people from across the city-region sharing their stories in a series of powerful videos and includes individuals who have personally experienced the impact of serious violence.

This burst of the campaign features Khadija, an aspiring midwife from 84YOUTH in Moss Side; Alife, a successful YouTuber from Gorse Hill Studios in Trafford; and boxing stars Naomi, Danish, Gerry and Hamelton from Oldham Boxing and Personal Development Centre.

By telling their stories about what matters to them in life – their values – their aspirations, and why they’re greater than violence, it’s hoped that the youngsters will inspire others to go out and achieve their future and to stand united against violence.

The campaign is part of the wider Greater Manchester community-led approach to tackling serious violence. Led by the VRU, it brings together Greater Manchester Police (GMP), Greater Manchester Combined Authority, the National Probation Service as well as health, education and youth justice services and the VCSE sector to address the underlying causes of violent crime and to work together to prevent it.

The ‘Violence isn’t me … I am greater’ campaign, aimed at 10–17-year-olds, was initially created with young people from 10 youth groups across Greater Manchester and the Greater Manchester Youth Combined Authority. Workshops, focus groups and surveys have given young people a voice to develop the campaign strategy, creative and key messages.

The Iamgreater.co.uk campaign website provides information to young people about what violence is, the impact it has and how to get involved in positive activities in their local area.

‘I am greater’ school and youth club resources also feature on the campaign website, providing youth leaders with a safe environment to discuss the subject of violence.

Everyone has a role to play in stopping violence. The campaign is here to help young people achieve this. If you are a young person, or a youth or community group, and you’d like to get involved in the campaign, get in touch via https://iamgreater.co.uk/